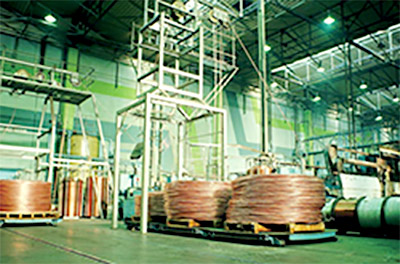 2. The working principle
High-speed machine: It is mainly used to thin the wire, and the wire is continuously thinned by the grinding machine of the front-stage main machine. The toughness of the wire after being thinned is reduced, so it is necessary to ensure that the tension is not too large when winding. Otherwise the wire will be broken. Therefore, after the wire is drawn, it must pass a tension pendulum to maintain a constant winding tension.

4. On-site problem solving
At the beginning of commissioning, the pendulum of our inverter is very jittery when it is wound up, and it appears to fluctuate up and down in a given target. As the winding diameter increases, the wire is easily broken, and the user reflects next to it. The winding of several other brands of inverters is very stable.

Processing steps:
1) Cancel the composite control, P0.03=1 There is no problem when trying the closed-loop PID separately, which proves that the PID is active.
2) The swinging lever is very powerful and may be a disturbance factor. Therefore, the filtering time of the analog terminal is lengthened to 0.5 seconds, but it still has no effect, and the jitter is still very strong, so the interference factor can be eliminated.
3) Will the PID parameter adjustment be too large, causing the system to overshoot and oscillate, which makes the PID unstable, so the proportional coefficient and the integral coefficient are reduced, and the sampling time is also ineffective.
4) At the beginning, I saw that the feedback voltage at the lowest point of the pendulum was 3.1V. I didn't pay much attention to it at first. Later I found that this value has been changing. Sometimes it is 2.7V and 3V after the shutdown. It can be seen that The voltage at the same point is not fixed, so adding mechanical vibration during winding increases the voltage of the pendulum to be more unstable, resulting in constant adjustment of the PID but no given point. Later, it was found that the gear behind the tension pendulum was a little loose. After tightening the back, the effect was better. The jitter was not so strong, but there was still an unstable phenomenon, indicating the feedback of the pendulum when the machine was running. The voltage is still fluctuating. After communicating with the agent, it is recommended that the equipment manufacturer come over and repair it.
5) After the maintenance of the mechanical manufacturer, the problem was completely solved, and it has been running normally for more than three months.